Steven Soule, Founder & CEO The heralding of the 20th anniversary of CMR Construction & Roofing brought back many fond memories to Steven M Soule, the company’s founder and CEO. He reminisces the time when he was new to the roofing industry and had a humble beginning as a residential sales representative.

During his career, Soule realized that the existing roofing services were not meeting tight deadlines or upholding the quality and integrity of the roofing systems. To challenge the status quo, Soule laid the foundation of CMR Construction & Roofing in 2002.

Today, CMR Construction & Roofing is backed by the necessary resources, expertise, financial strength, and stability to offer the most comprehensive roofing systems that exceed customer expectations. The company is driven by an ambition to provide personalized, value-added services to its clients. By using premium-grade products like Titanium UDL underlayments made of NASAdeveloped materials along with advanced copper nails and flashings, CMR Construction & Roofing ensures that customers get roofing systems that are 100-year rated.

CMR Construction & Roofing was also listed as the 10th largest roofing contractor in the U.S. in 2021 and has recently surpassed its own revenue goal of $1 billion mark in sales. “Our strong emphasis on deploying superior quality roofing materials and highly skilled engineers for roof restoration has helped us handle projects of all sizes—no matter how complex they are,” states Soule.

The Roofing Ebb and Flow

The proliferation of technology has led to the rapid expansion of the global roofing market, estimated to reach $156 billion by 2030 with a CAGR of 4.3 percent. Roofers today have become adept at using drones, CAD software, aerial mapping, and AI to interpret aerial mapping to process roof data effectively. They also leverage innovative roofing materials, easy-to-use online tools, and mobile apps to swiftly generate project estimates. However, the challenges pertaining to supply chain disruption and material procurement have unfortunately stubbed this growth trajectory and compelled roofers to spend more time and effort on every project. They have to constantly redesign roof systems and formulate alternative plans to deal with supply chain shortages.

CMR Construction & Roofing faced similar challenges. It had to develop different roof designs several times for a single project due to the unavailability of materials within the stipulated timeframe. Despite these hardships, the company has maintained a strong emphasis on historic restoration work, which has helped it gain a reputation for quality and competency in the industry.

Responding to storm damage has also been a significant niche area for CMR Construction & Roofing. For example, in the coastal areas of the U.S., where tropical storms and hurricanes are a never-ending threat to homes and buildings, it destroys the roof to such an extent that they are deemed beyond repair by most roofing companies. But not by CMR Construction & Roofing! In fact, the company was recently awarded the Hurricane Hero Award from the Storm Ventures Group for helping rebuild and support the community of Southern Louisiana after the hurricane in 2021.

What further enables CMR Construction & Roofing to address clients’ diverse needs is its team’s ability to travel to any corner of the country to take up a project without hesitation. While most companies face logistic hurdles in traveling long distances and mobilizing their resources at short notice, the company’s engineers are always on their toes and can swiftly initiate a project regardless of the location.

Creating Architectural Wonders, One Roof at a Time

Delivering on its promise of providing top-of-the-line roofing systems, CMR Construction & Roofing has been at the forefront of building several roofs for industrial, institutional, retail, and government facilities. The company is currently licensed in more than 30 states in the U.S. and routinely performs a myriad of tasks in more than ten states. Earlier this year, the company completed almost a million square feet of temporary roofing across 22 South Louisiana schools severely affected by Hurricane Ida. CMR Construction & Roofing repaired these storm-hit institutions and helped the school committee resume classes in a matter of weeks versus months.

CMR Construction & Roofing has showcased its ingenuity in several historic building restoration projects. One such instance that truly showcases the ability of the company’s team to easily mobilize its resources and equipment was the recent roofing project for the Governor’s Mansion in Utah. The existing roof was made completely of copper panels and was not a common assembly in today’s era. Even though it was meant to last for at least 50 to 75 years, it unfortunately had to be removed within 13 years due to its initial design and installation, leading to several issues, such as water intrusion into the building. CMR was tasked with installing a new roof with a new design. It was one of the most technically complex undertakings by CMR Construction & Roofing as it required highly skilled roofing installers with multi-generational experience along with the knowledge of how to form, solder, and join copper panels. The company’s team successfully assisted in redesigning the roofing system and laid a completely new, custom copper roof for the building, all done on schedule and under budget.

With every client engagement, CMR Construction & Roofing has been at the top of its game with a significant emphasis on showcasing its expertise and level of care and attention dedicated to each project. The company has strengthened its foothold in the roofing arena by having a team that feels like a unified family. It also devotes a lot of time and effort on hiring talented individuals and then creates the best-suited role for them.

Looking ahead, CMR Construction & Roofing plans to diversify its revenue streams further to power business growth. After specializing in storm damage repairs and historic restorations, CMR is looking to venture deeper into the commercial roofing market and continue to grow its revenue in that sector to a great length by the end of the year. Last but not least, the company is also planning to broaden its competencies in the reconstruction services sector. “Instead of limiting ourselves to repairing roofing systems, we are going to take up full-fledged restoration projects for condominiums, schools, churches, or other buildings in case of any storm damage incidents,” concludes Soule. 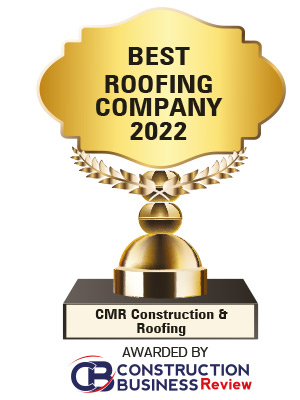 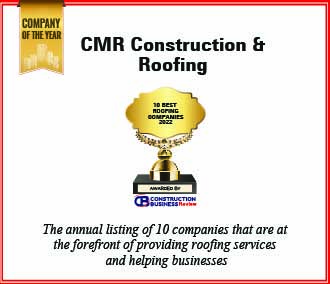